gMSA can be used for schedule task, IIS application pools, Exchange and SQL 2012  which stand alone MSA were not able to do.

gMSA use the Key Distribution  Service (KDS) to enable automatic password management across multiple devices. This requires the follow command to be run and 10 hours before it becomes effective (only has to be done once per forest). If you try to create the service account before the key becomes effective then you get a “Key does not exist” error.

It is best practice to create a security group and add the computers that will use the gMSA. 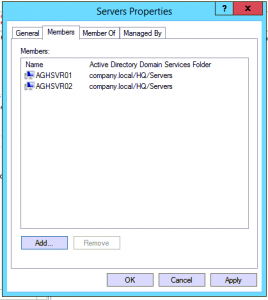 Once the security account has been done, the gMSA account can be created. This is done using the same camlet as a stand alone MSA

If the test returns $True then everything is ok.

Use gMSA in Scheduled Task

With creating a scheduled task using a gMSA we are unable to use the Task Scheduler UI, therefore it needs to be done in Powershell